I know I’ve been MIA for quite a while, but life has been just kinda crazy.

Anyway, I wanted to share one of the things I’ve been up to (see below!), and that ties in to what’s going on now: School’s Starting! Which means I have to get on the ball with menu planning. Keep in mind that I’m Vegetarian for a Year, but my family still eats meat. So, I will be posting my weekly menus here–which will be veggie heavy, but there will still be some meat entrees as well.

I’ve joined a fruit and veggie co-op called Bountiful Baskets. The basic premise is this: At the beginning of the week (Monday – Tuesday OR Tuesday – Wednesday depending on what state you are in) you go to the website to make a contribution. On Saturday you drive to your pick-up site and pick up your produce. The produce is sorted into two laundry baskets–one for fruit and one for veggies. You need to bring your own container to bring the produce home in, as the baskets stay at the site. 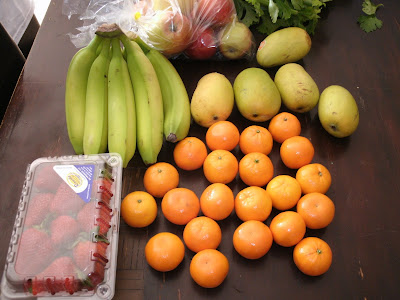 When we first started this, the closest site was a 45 minute drive away, and that site was every other week. The next closest site was Las Vegas, which is a 60+ minute drive. I was hooked after the first time, though, and decided that this was something that needed to be in my neighborhood, so I contacted BB to figure out how to get a site started closer. 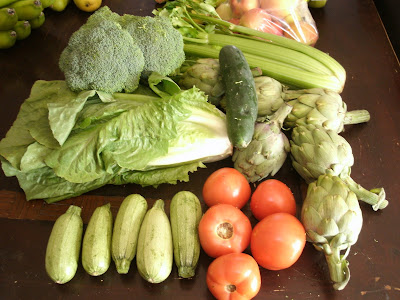 The fruits and veggies have pretty much saved me this summer. As a veg with almost no inspiration on veggie meals, it’s no big deal to roast up some veggies or throw together a salad. And that funk is starting to pass, and I’m starting to get inspired by the produce I’m getting–some of which I don’t normally buy because of expense (example: pineapple), and some which I’ve never even had the opportunity to buy (example: white asparagus).