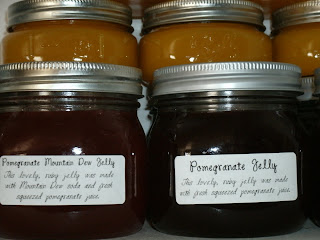 So, I’ve been kind of caught up in this whole jelly making thing. You might even call it slightly obsessed. It started out innocently enough…I just wanted to make pomegranate jelly. But then I needed to get creative, so I started looking online for “creative” pomegranate jelly recipes.

So then I started looking at jelly recipes at RecipeZaar. I started by searching “jelly” which gives some 650 results, but not necessarily all jelly recipes. Many of them just have jelly in the title (think PB&J). So then I clicked on one of those jelly recipes and, down at the bottom of the page, clicked on the jellies category. This brought the total down a little to around 250 recipes.

But now that I’ve browsed hundreds, maybe even thousands of recipes, I’ve got the bug. The jelly and jam bug. And not for your normal jelly or jam recipe. Nooooooo….I want to make the weird ones. The ones that make people say “What is this again?”

I started with the Pomegranate Wine Jelly. Yep, my own recipe. Because, hello…wine and pomegranate juice…in a jelly…really….I made a bunch of this. I used two different wines that I had in my little wine refrigerator: a pinot grigio (which is my favorite wine, ever) and a white zinfandel (which is the wine for non-wine drinkers). I had a huge bottle of the white zinfandel. It had been in the cupboard for at least two years (for two reasons: I don’t really drink white zin–it was a gift–and it was too big to fit in the wine fridge). Both of these jellies are to die for…just the perfect amount of pomegranate zing with a dash of tipsy grape thrown in at the end.

But then I had one little cup of pomegranate juice left. Just one. Not enough to make another batch of plain pomegranate jelly. And I already had a LOT of pomegranate wine jelly. So I got creative. I’d already bookmarked the (ummm, weird!) recipe for Mountain Dew Jelly. Because I have a couple of friends who are addicted to the stuff. So, I just decided to get a bit creative. And this is the result of that experiment: Pomegranate Mountain Dew Jelly. I did this in pint jars rather than 1/2-pint jars, because, well…I don’t have THAT many friends who would dare try it…and I ended up with four jars. And it actually tastes pretty darn good!

And then there is the Tang Jelly (The Drink of Astronauts!). This one is just so out there that I had to try it. See, I have these Boy Scouts…well, one of them in particular just cannot go on a camping trip unless there is tang along. He drinks it hot in the morning. Which I think is gross, but honestly, I remember liking tang as a kid, so I’ve given him the benefit of the doubt. I made this as Christmas gifts for those scouts…in homage to him. And I tasted it. It really is pretty good, as a jelly.

And now my son, who thinks Mountain Dew Jelly is probably gross, is stuck on the idea of Dr. Pepper Jelly. And I’m thinking Root Beer Jelly might be a nice addition to our Soda Jelly Collection. 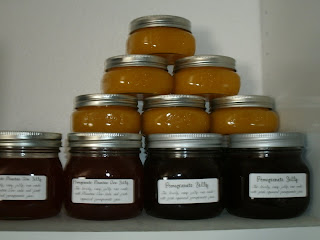